With the growth in numbers of foreign travelers to Japan in recent years, "food diversity" has become a hot keyword in industries such as tourism, food manufacturing, and food service, as they look to deal with food tourism. Of course, with differences in culinary culture, dietary habits, religion, and other aspects around the world, there is a huge variety of characteristic foods and dishes. Other than religious and geographic characteristics, there are also health-based preferences and medical restrictions. Food diversity means developing an environment that respects and accepts those differences. It means taking action to broaden the range of meal options available to foreign tourists, by developing and providing diverse menusthat consider the various constraints.

Halal foods for Muslims have been in the spotlight in Japan, but compared to the growth in numbers of foreign travelers to Japan and the diversifi cation of domestic culinary culture, support for food diversity in general hotels and restaurants etc. has been lagging behind. The Japan Tourism Agency and the Ministry of agriculture, Forestry and Fisheries have prepared and published a manual on the subject, to promote the spread of food diversity. In that context, the second "Natural Food: Audition to Discover New Recipes" event took place as a program highlight at the 47th International Hotel and Restaurant Show. The event’s slogan was “Creating healthy and delicious recipes to offer in bars, restaurants and stores”, and its Grand Prix, determined by judges and general show attendees, was joined by the “Judges’ Special Recognition Award”for vegetarian and vegan recipes.

In this issue, we have devoted the largest share of our pages to this event. The Cabinet Secretariat canteen has been offering a vegan menu since April 2017. The Cabinet Secretariat canteen has even been featured on the ”Meat Free Monday” (Eat vegetarian / vegan once a week), which is promoted by Paul McCartney. From this May, it has jumped from "veggie once a week" to "veggie twice a week". The canteen at Tokyo Metropolitan Government Office started offering a vegan set menu in October 2018.

Mr. Norio Kojo of the Cabinet Secretariat, appearing at a special talk session of the audition event, said "Events like this are valuable opportunities for the government side to demonstrate its position of working together with the private sector. It was also good for the Cabinet Secretariat and the Metropolitan Government to appear together and get our message across directly. Vegetarian / vegan food may appear inaccessible and hard to understand, but it’s nothing special and can be eaten without worrying, so I hope people will all relax and enjoy trying vegetarian / vegan food". 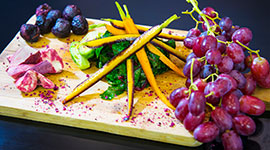